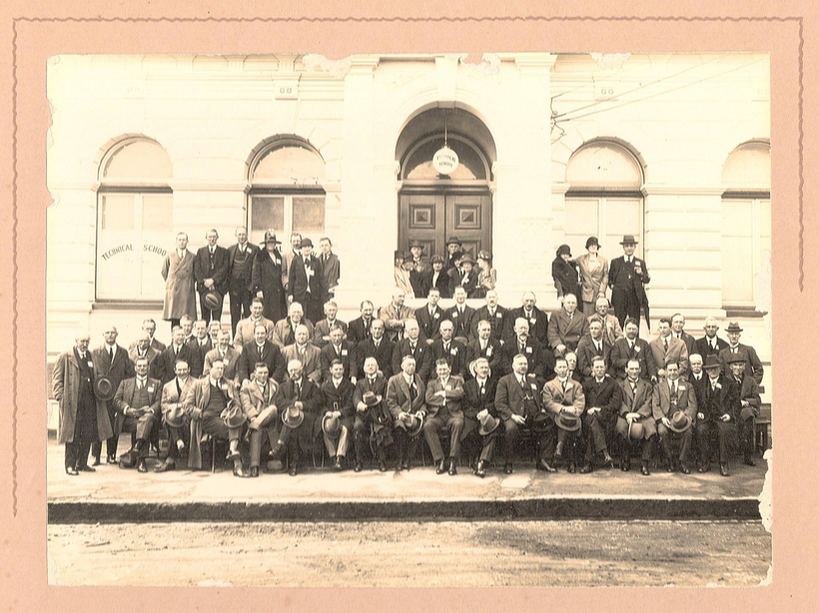 The photograph shows a group of Brighton’s leading citizens photographed in front of the Free Library Building in Bay Street, Brighton.  Date believed to be c. 1918.

The gift of the library building would save the Government about 2,000 Pounds.
​
“The Argus” Wednesday, 30 June, 1915, P11.
​The matter of establishing a primary technical school at Brighton has been urged for some time, and at the meeting of the Brighton Council on Monday it was decided to inform the Education Department that the free library building would be made available for the purpose.

“The Victorian Government Gazette.”
Published by Authority.
No. 179 Wednesday, December 18, 1918.  3524.
Education Act 1915.
Technical School Established at Brighton.
​In pursuance of the provisions of Section 78 of the Education Act 1915, His Excellency the Governor of the State of Victoria, by and with the advice of the Executive Council thereof, has, by Order made on the 10th. Day of December, 1918, established a Technical School at Brighton.
F. W. Mabbott.
Chief of the Executive Council.
At the Executive Council Chamber,
Melbourne, the 10th. December, 1918.
​
​One year later, “The Argus” recorded the following :

“The Argus” Wednesday, 19th. February, 1919.  P 8.
​The Minister for Education (Mr. Hutchinson), is to meet the Brighton Council at the local town hall this afternoon to consider matters connected with the erection of a technical school in Berwick street, at an estimated cost of 10,000 Pounds.