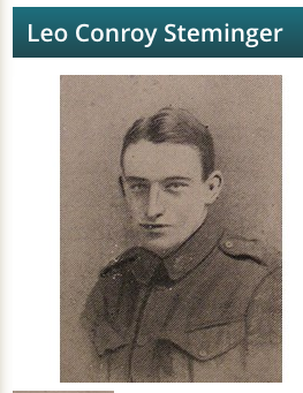 This tribute to Leo Conroy Steminger is very important because it represents the story of many servicemen who missed the ‘fatal bullet’ on an overseas battlefield, but returned to Australia to suffer the painful consequences of their wartime experiences until the day of their death, often many years later.

Leo Steminger taught English and Social Studies at Brighton Technical School, Berwick Street, Brighton, from 1935 until 1940.   His name appears on the Roll of Honour in the Brighton Technical School “Sea Spray” Magazine,1952, page 2.  There is a mistake in the listing in the Roll of Honour – Leo Conroy Steminger served in World War I, not World War II, as stated in the “Sea Spray” Magazine.

Leo Conroy Steminger was born on the 25th. November, 1896, near the town of Bairnsdale and, at the time of his enlistment in the Australian Imperial Force (A.I.F.), on the 7th. August, 1915, was a student at Melbourne University.

A copy of the World War I Service Dossier of Leo Steminger, consisting of 181 pages, was purchased from the National Archives of Australia.   The Dossier details his wartime injuries, and the agonizing medical problems he experienced during the nineteen years following his discharge from the A.I.F. on the 15th. March,1921.   He also endured many frustrations when being assessed by the Repatriation Board for a pension to compensate him for his inability to regain his full health after returning to Australia from the trauma of the Ypres campaign in France.

2 June, 1918.
Under ether, sinus enlarged and many sequestrae removed.
Cavity cleaned and drained.

1 May, 1919.
X-Ray.   No sequestration detected.
Bismuth injection might help.

12 September, 1919.
Operation – incision made in back of thigh over course of
nerve.   The nerve exposed and was found to be only
slightly bound down with scarred tissue from which it was
dissected out and then incision closed.

23 November, 1919.
Operation – knee endeavoured to be bent under anaesthetic,
but no extra movement obtained.

16 January, 1920.
X-Ray.   Left leg, (for condition of bone ? sequestrum).
Marked irregularity at site of old fracture but union is firm
and alignment good.
No sequestrum visible but there are several metallic foreign
bodies present, one lying just in front of outer side of site of
fracture and one above this ?
in the bone and two or three lower down!

(Apparently early rheumatoid changes.
​      What is the foreign metallic matter?)

Final Board
​13 January, 1921.
No. 11 A.G.H.
Disability is due to Military Service.
Present degree of disability is not
permanent.
Anticipate total improvement, but very slowly.
Incapacity 50%.

30 September, 1921.
Operation – Incision along side of thigh – bone laid bare –
no pus or sequestra found, although explored all
around femur region.   Wound closed.

(The medical reports for the years1925, 1926, 1927 and 1928
detail the ongoing formation of abscesses in the left thigh
and the need for constant medical intervention.
Also, the wasting of the left thigh and leg.)
​
Form K  (Completed)​
​22 August, 1932.
Dr. R. C. Withington.
Nil improvement during the past six months.
Partially incapacitated permanently from this date.
Incapacity 75%.
Occupation – Teacher.
​      Lost about four days.

25 July, 1938.
Still some discharge from wound.
Appears to be granulating up.
No pain.   Eusol dressings.

O.E.   Free sero-sanguineous discharge from deep sinus –
down to bone – on inner and outer sides of left thigh.
Some inflammation round sinuses.
Temp.100.   Pulse 90.
​      States feels better today and that his temperature was normal
yesterday.   To report weekly for probing.
​
​Operation. Mr. Balcombe Quick
17 August, 1939.
(Spinal Anaesthesia).  H.I. Morph. Gr. 1/3.  Atropin gr 1/150.
Incision made through the outer sinus and the femur bone
​      was found.
Wound B.I.P.Pd. and S.W.G. sutures inserted.
Incision then made through sinus on inner side of left thigh,
and sinus found leading to a pocket at the back of femur.
Counter incision made into the pocket from posterior surface
of left thigh and tube inserted.
Wounds B.I.P.Pd. and closed with few S.W.G. sutures.
​
19 August, 1939.
​      Comfortable.   Little discharge from tube and some from wound
on inner side of leg.   Outer wound clean and healing. ...............
​
Operation. Mr. Balcombe Quick​
​7 September, 1939.
​      (G.A.)  H.I. Morph. Gr. 1/6, Atrop. Gr. 1/150.
Wound on inner side of thigh and that on posterior
aspect re-opened.
Some pus evacuated.
​      Rubber dams inserted.   Foments.
​
Decision of Repatriation Board
23 October, 1939.
​      Pension reduced to 75% rate from 26 October, 1939.
(Stabilized).
​
Office Minute
6 December, 1940
​      Dr. Robertson informed me this a.m. that a relative of above-named
had ‘phoned him this a.m. and advised that ex-soldier had died
suddenly last night.   Place not stated.
A doctor had been called, but arrived after death occurred and
certificate of death could not be given.
I ‘phoned coroner’s Orderly, City Morgue, and confirmed death
of this man.
Coroner’s Orderly desires any information available re any
​      condition noted which may have caused sudden death.
​
​Coroner's Notes​ - per I.O.
​13 December, 1940
Name – LEO CONROY STEMINGER, aged 44 years.

Deceased was found by wife in sleepout on verandah,
lying on the floor in his pyjamas.
Body examined, no marks of violence.
No suspicious circumstances.
Probable cause of death – not known, (apparently heart failure.)

Body moved to the City Morgue.
Deceased last received medical attention about
12 months ago for war injuries to his left leg
​      (attended the Repatriation Military Hospital).
​
​Further Report
I have to report that about 12.30 a.m. on 6–12–40, from a telephone message received at the Brighton Police Station, I went to 42 Grant Street, Brighton, where I saw the deceased lying on the floor in a sleepout on the back verandah.   Deceased was in his pyjamas.   Deceased’s wife was present;  she stated that her husband had never complained of feeling unwell;  she heard him return home about 11 p.m. on 5–12–40 and heard him moving about in the sleepout.   She did not go near him, as it was his usual custom to go to his room to rest when he returned home in the evening.

He had the day before his death, informed her that he was having a heavy time with examination papers.   Deceased was a teacher at the Brighton Technical School – that is why she did not go to the sleepout to disturb him.   About 11 p.m. she heard a noise in the sleepout, as if someone had fallen.   She went to the verandah and saw deceased lying on the floor in his pyjamas;  he could not speak and did not recognize her.   She immediately summoned Dr. Giblin, who, on arrival, pronounced life extinct.
​Post Mortem Examination
By Dr. Mollinson, 6–12–40.
External appearance.   Body of a big man 5 feet 11 inches, dressed in pyjamas, rigor and post mortem staining, no marks of violence, deep old scar on front and back of left thigh, arcus senilis.
​
Cause of Death
Fibroid Mycarditis.   Coronary obstruction.
On 6–12–40, Mr, Tingate, Coroner, ordered no Inquest.

Ex-member was in receipt of a pension for a G.S.W. left thigh, which, on account of sepsis required prolonged treatment, prior to discharge, and on several occasions since.   There is nothing in the Hospital notes to indicate cardiac affection prior to the fatal event.   Atheroma is a constitutional condition which varies in degree in different individuals, and frequency has a hereditary factor.   The presence of an arcus senilis at age of 44 indicates a tendency to premature senility.

The mention on his A.P. that his father was deceased, apparently during the period of service, is also suggestive, unless the apparently premature decease of the father arose from other than a cardio-vascular cause.

In my opinion, death was not the result of War Service or his accepted war service disabilities.

Extract from Form 'U', Widow
25 February, 1941.
I first met my husband in 1919 and we were married in May,1924.   From time of our first meeting my husband has not been in very good health, and as time went on I noticed a general decline in his health, which I consider was brought about mainly by the severe nature of his disability.   It was very noticeable that whenever we were out walking, he became easily fatigued and breathless, and as a result of this we found it necessary to purchase a car some eight years ago.   He also found that it was impossible to do any manual work such as mowing the lawn or digging the garden.   He had to employ a man for this work one day every fortnight.

He was very reticent about complaining to his immediate family, but for years showed signs of sleepiness and fatigue.   Though I am unaware of his having purchased drugs or medicines of any description, he may have done so.   At times he was averse to taking A.P.C’s or Aspro on account of accentuating his heart condition.

Dr. Lind has been the family doctor for about twelve years, and although he was not called to the house to see my husband, I had discussed his health with him.   He may have noticed something about my husband’s health which may help my case.   Practically the whole of our married life, his wounds have been inflamed or discharging.   This I consider must have had a serious effect on his heart.   He was insured with A.M.P. Society in 1923.   Father died on 13–4-24 at the age of 62 years.   From the time of his discharge from the Army, he was in the employ of the Education Department.
​
Dr. J. Smythe Yule
3 March, 1941.
Appeal against rejection of death from Fibroid Myocarditis and Coronary obstruction.   My opinion of 16th. December, 1940 was based on the assumption that this ex-soldier probably came from a short-lived family;  and a family tendency to death from Atheroma and its sequelae owing to an inherited weakness is recognized in the text books as not uncommon.

However, it has been pointed out that the entry on the A.P. of his father’s death is misleading, as this did not occur till some years after the war – namely in 1924 at the age of 62.

Considering other factors, Price’s textbook of the Practice of Medicine, states that “it has been said that the most important cause of Atheroma is chronic poisoning.”   He also refers to its experimental production in an acute form by the injection of bacterial toxins.

In view of the absence of other evidence of causation, the ex-member’s death at age of 44 cannot be entirely dissociated from chronic sepsis in connection with his G.S.W. leg, which has been almost continuous in the last few years.

I consider that, on the benefit of the doubt, his death should be accepted as a sequelae of his accepted disabilities.

There is no record of Leo Conroy Steminger’s war service on his grave, only the name “STEMINGER”. 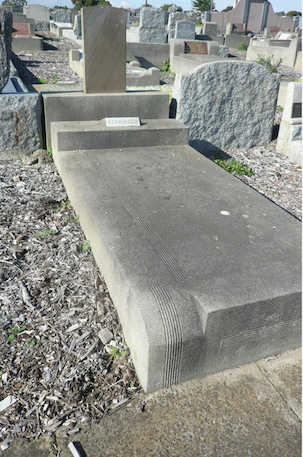 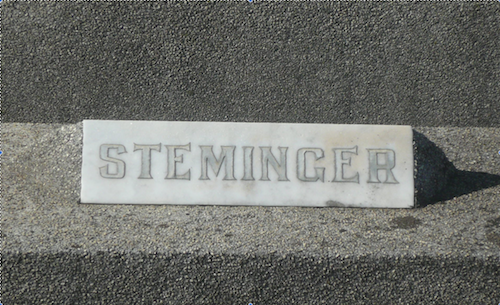 STEMINGER – The Members of the Returned Soldiers’ Bowling Club are respectfully requested to follow the remains of their dearly esteemed comrade and secretary, Leo, to the place of interment, the New Cheltenham Cemetery.
The funeral is appointed to leave the chapel of Messrs. Bathurst and Decker, corner Kooyong and Glenhuntly roads, Caulfield, at 11.45 a.m.,  THIS DAY and members are requested to assemble at the clubrooms at 11.25 a.m.
L. R. MILLER, President.
“The Argus” Saturday, 7 December, 1940.   Page 4.

A search of the Internet Database of Australian Newspaper Death Notices  -  “The Ryerson Index”, revealed that Effie Steminger died on the 25th. February, 1978, age 83 years.  There is a photograph of the plaque dedicated to Effie Steminger  on the “Billion Graves” website,  The plaque is in the Geelong Eastern Cemetery. The photograph is courtesy of “Nancy” and the details were transcribed by “Mary McCoy”.   Thank you Nancy and Mary.

The “Billion Graves” website also carries a photograph of the memorial plaque dedicated to Joan Steminger, who died on 18–4–1973, age 43 years.  It is located in the Geelong Eastern Cemetery.   The photograph is courtesy of  “Nancy”, and the details were transcribed by “Gemini1945”.   Thank you Nancy and Gemini.