“Ron attended Primary Schools in Kallista, Carrum Downs, Hepburn Springs and Sandringham East before going on to Brighton Technical School.   On leaving school, he worked with his father, first on houses in Black Rock and, then during the war, with the Civil Construction Corps at Port Melbourne and at the Small Arms factory at Footscray.   He was for a year at General Motors before joining the Air Force in 1944.   His training and duty in the Air Force took him to Rocklands Dam, Balmoral, Laverton, Adelaide, Cressy and Tocumwal.   His discharge came on his 21st. birthday.

After the war, Ron went with Robert, (his brother), on jobs for the Department of Works, twice to Darwin and once to Mildura building the huts for the University of Melbourne Campus there.   After one of the stints in Darwin, they bought two blitz-buggies, loaded one with a non-functional jeep and the other with an ex-Army hut made of tubular steel and corrugated iron, dismantled.   This they sold to a wool-grower on the way South.   The jeep was repaired in Melbourne and used by Ron afterwards.

Over a period of perhaps ten years, on and off, Ron spent time in the Centre of Australia, mining for Wolfram at Hatches Creek and for Opal at Cooper Pedy.   Hatches Creek was a place to visit while he was there and most of the family ventured there to see him at various times, all by car.   But the bulk of his time since the post-war years was spent building “spec” houses in Cheltenham, Parkdale, Mordialloc and Seaford.   Two of these last were bought by his nieces, Julie and Susan for their families.   As well, Ron built a block of ten flats in Highett which he still owns and maintains.   On what was Poppa’s last big trip away, Ron and Will took him to Karumba on the Gulf of Carpentaria, in Ron’s Peugot 404.   After their mother’s death in 1980, Ron and Robert (and Toby the dog) went to Warracknabeal to build a house for a friend.   Ron lives now in the old family home that Poppa built in 1935 at 248 Bay Road.  He is about to renovate it.”

Ron was an active member of “Friends of Bay Road Heathland Sanctuary” for 20 years.

Born on 21 February, 1925 in Black Rock, Ron attended a number of schools including Sandringham East and went on to become a carpenter and builder – a trade he learned at Brighton Technical School.   He served in the Royal Australian Air Force between 1944-1946 and returned to build spec homes in Cheltenham and Highett.   Ron lived in a home on Bay Road, adjacent to the Bay Road Heathland Sanctuary, which was built by his father.

He is survived by his sister Val and sister-in-law Marcellina, who described him as a ‘gentle and kind man’.   Our thoughts are with the family.” 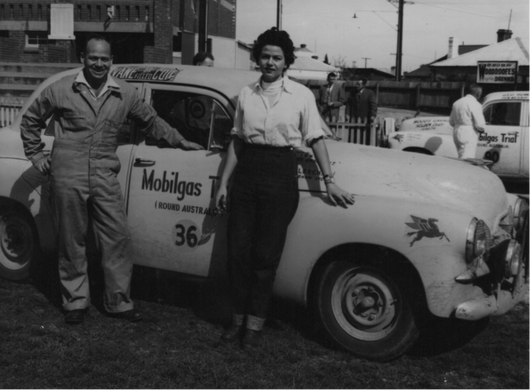 Ronald Leech and Valerie Leech standing beside their Holden sedan during the 1956 Mobilgas Around Australia Trial.   They came in 12th. in the gruelling 8,000 mile Mobilgas Trial.
​
Reference :   Photograph courtesy of Valerie Rae.
​
​
​Ronald James Leech’s World War II Service Number is 149667.   The Australian National Archives access status of his record is “Not yet examined”.

Ronald did not marry.    He died at Abberfield Aged Care, Bluff Road, Sandringham, on the 4th. March, 2019.   His obituary notice which appeared in “The Age” on the 7th. March, 2019 reads –
“Son of Robert and Marie, loved bother of Robert (dec.), Marcelina (sister-in-law), Will (dec.), Gwen (dec.) and Valerie, his nine nephews and nieces and twenty three great nephews and nieces.    A gentle and kind man”.
​ 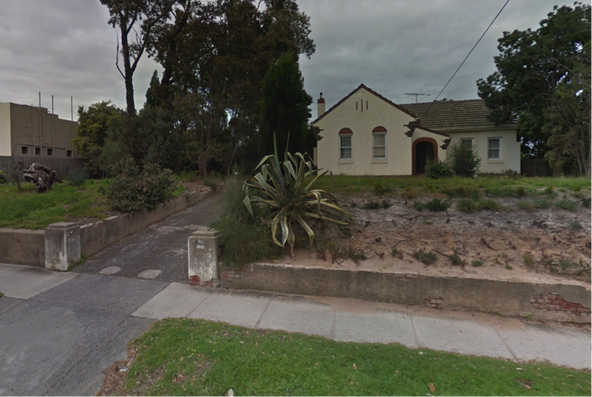 The Leech family home at 248 Bay Road, Sandringham, adjacent to the Bay Road Heathland Sanctuary.   The home was built by Ronald’s father, Robert Arundel Leech, starting in 1933 and completing it in 1935, when the whole family moved in.