Brighton technical school, Victoria, Australia.
Michael William Mace OAM
A BRIGHTON TECHNICAL SCHOOL STUDENT 1955  -  1957
​Michael attended Brighton Technical School 1955 – 1957 where he was made Form Captain in 1957, after which he transferred to Brighton High School to complete his year twelve studies. 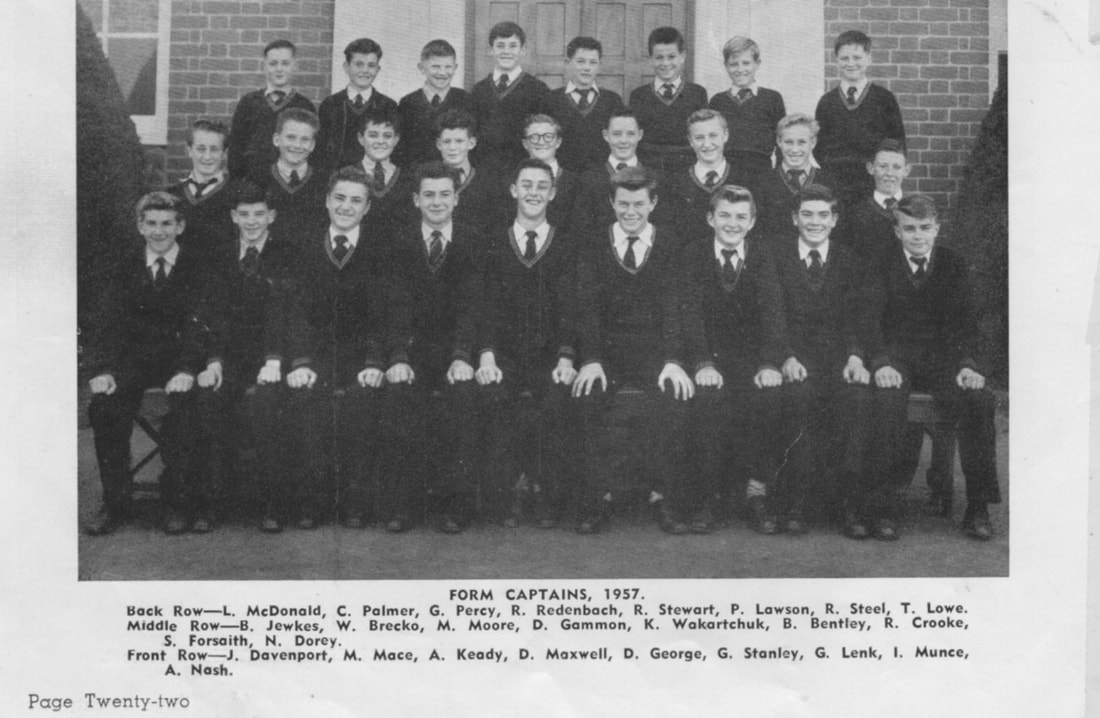 “Amateur theatre in Victoria became so noticeably active during the 1960s that on 22nd February, 1963, The Age newspaper published an article headed ‘Another New Group’.   Theatre companies were described as “springing up like mushrooms” in and around Melbourne with the latest being “the Adelphi Players in the Brighton district.”

The Adelphi Players, now known as The Adelphi Players Theatre Company, remains unique because for over fifty years, and more than one hundred and sixty shows later, the company’s successful administration and direction has been solely managed by non-performer Michael Mace.

‘Adelphi’, as the company is fondly known, was formed in 1962 by a group of about twenty people, including Michael Mace.   Michael had joined the Bayside Little Theatre at seventeen years of age and was nineteen when Adelphi formed, named because of admiration for the Adelphi Theatre in London.   Michael explained that the English meaning of the word Adelphi, ‘brotherhood’, appealed to members.

His parents gave up the lounge-room of their Brighton home for rehearsals and Michael stage managed the company’s first show The Winslow Boy, presented in 1963 at St. Luke’s Presbyterian Church hall in Wilson Street, Brighton.   A member of the Ormond Uniting Church joined the Adelphi Players and they were offered use of the church hall.   Since 1965 until today, the company continues to rehearse and perform at this church, contributing donations.   The Company has also presented productions at the heritage listed Labassa in Caulfield, raising worthwhile funds for the National Trust and restoration of the mansion.”

Contact details for the purchase of the book are:
Cheryl Threadgold
P.O. Box 215
Black Rock
Victoria   3193.

​All profits go to The Victorian Drama League & Music Theatre Guild of Victoria.

Congratulations to Mr. Michael Mace OAM from Ormond, for service to community theatre, including in roles with the Victorian Drama League.” 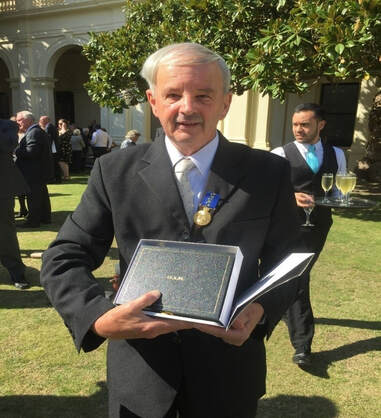 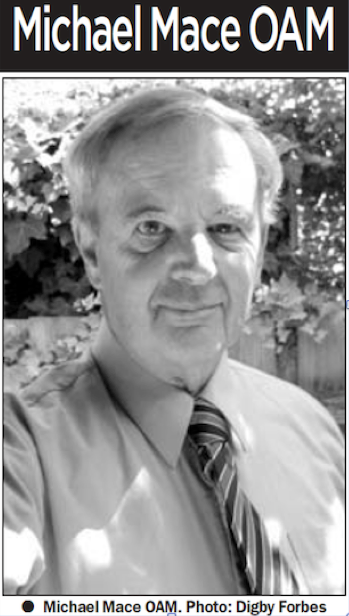 ​The following recollections have been contributed by Shirley Joy who visited the Mace family home at 47 Champion Street, Brighton, c. 1997, and had the pleasure of meeting the charming couple, Mr. and Mrs. Lindsay Mace, parents of Michael Mace OAM.

​The following is an extract from:   1851 - The First 100 Years and the Next Decade.   The Story of The Melbourne Orphanage - 1961.   Page 23.
Compiled by J. C. Butler, J.P., Secretary and Superintendent of the Orphanage and J. C. Janicke, B.A., Dip. Ed.   First printed in 1951.
SECONDARY EDUCATION  1934 – 5.
​“At this time secondary education began to receive more attention than hitherto.   Most of the boys in the Orphanage were city bred and were not at all attracted by the prospect of life on a farm as their future.   Many of those who were sent to the country, returned to the city as soon as their term was ended.   Many of the girls, too, desired to fit themselves for some career other than domestic service.   In 1934, therefore, it was decided that boys and girls showing special ability at school should be given the opportunity of continuing their education at either a Technical or High School according to their ambition.   The first group consisted of three girls and six boys.   They all attended Brighton Technical School, and the experiment proved sufficiently successful for it to become established practice.   Every year since, boys and girls have attended either Brighton Technical School, Hampton High School, or one of the Business Training Colleges.”
​
CHERYL THREADGOLD OAM AND MALCOLM THREADGOLD
Cheryl Threadgold OAM and her husband Malcolm Threadgold, residents of Black Rock, Victoria, are both familiar with the broad range of educational subjects and facilities that were offered by the Brighton Technical School as they attended the night-school classes there in 1971 to further their studies.    They studied HSC Australian History and the teacher was Mr. Eddie Boyle.  Malcolm did two more subjects by correspondence with RMIT and Cheryl did one English subject via correspondence and studied music theory for the other.   Cheryl remembers it was demanding at the time, working a full day at Channel 2 and then going to night school and fulfilling the study requirements.   Recently, Cheryl completed her Doctor of Philosophy studies, so has deservedly earned the title Dr. Cheryl Threadgold OAM.


The Medal of the Order of Australia, OAM, was granted to Cheryl Elizabeth Threadgold on the 14th. June, 2010 “for services to the performing arts, particularly through the Mordialloc Light Opera Company, and to the community.”

In July, 2020, an invaluable historical book entitled  -  In the Name of Theatre: The History, Culture and Voices of Amateur Theatre in Victoria  by Cheryl Threadgold was released to the public.  The book came out of Cheryl’s PhD thesis which required research at the Prahran Mechanics Institute (PMI), a community owned and run library specializing in the history of Victoria, Australia.

The book was self published by Cheryl Threadgold to ensure the history and culture of amateur theatre in Victoria is on record for theatre-makers today and the researchers of tomorrow in a quality book that sells for a moderate price, $49.50.   All profits go to The Victorian Drama League & Music Theatre Guild of Victoria.

The contact details for the purchase of the book are :
Cheryl Threadgold, PO Box 215, Black Rock, Victoria, 3193.

There is a website for people who wish to purchase a copy of  -  In the Name of Theatre: the History, Culture and Voices of Amateur Theatre in Victoria, by Cheryl Threadgold.     ISBN 978-0-646-81339-4.
https://www.inthenameoftheatre.com.au/
​
The information regarding the awarding of the Order of Australia Medal, (OAM), that has flowed on to me, Shirley Joy, over the past two months is confirmation of the extraordinary role played by the Brighton Technical School, not only in the education of students at various levels of education, but in the extremely wide range of categories and subjects taught at the school.

Many students entered the school at the junior technical school level in    Form I, and progressed to qualifications that allowed them to follow an occupation or trade which presented them with the opportunity to live a quality life-style.   Many mature adults attended the night-school classes to further their qualifications to enable them to participate in tertiary education, or an elevated  level of employment.   Brighton Technical School offered the members of the community, young and old alike, the opportunity to study and move forward to broaden their knowledge and qualifications which enriched their lives.

A study of the history of the Brighton Technical School curriculum reveals that during secondary education the school emphasised and encouraged the students to participate in and have regard for the welfare of the wider community.

Recently, I have learnt that three people who studied at Brighton Technical School were granted the Medal of the Order of Australia, OAM, for their contributions to the Australian Nation.

Michael Anthony Burge was awarded the Medal of the Order of Australia, OAM, on the 26th. January, 2010, for service to psychology, and to the community through the development of training and treatment protocols for trauma.

Cheryl Elizabeth Threadgold was awarded the Medal of the Order of Australia, OAM, on the 14th. June, 2010, for service to the performing arts, particularly through the Mordialloc Light Opera Company, and to the community.

Michael William Mace was awarded the Medal of the Order of Australia, OAM on the 26th. January, 2018, for service to community theatre.

In addition to administering and artistically directing the Adelphi Players Theatre Company, Michael has volunteered for many years at The Victorian Drama League, firstly as a member of the Committee of Management, and for the past decade as co-ordinator of the Awards’ Adjudication Team.   Michael also volunteers once a week at the VDL rooms.   For the past two years Michael has also taken a Play Reading group fortnightly for the Glen Eira U3A.