Florence Swan was a career teacher who joined the staff at Brighton Girls’ Technical School, “Cora Lynn”, 45 Cochrane Street, Brighton, in 1929, and remained there for nearly two decades, serving as Headmistress during those years.   The Melbourne “Age” newspaper of Friday 21 December, 1928, page 6, carried a report on Miss Swan’s arrival at Brighton Technical School.
​
​
“BRIGHTON TECHNICAL SCHOOL.  1928
Seven Years of Progress
New Buildings Required
​In common with most of the other technical schools in the State, the Brighton Technical School has abandoned the idea of holding a formal speech night function – the school council deciding to present scholastic prizes at the annual exhibition of school work, and as far as possible to announce the names of prize winners at a special assembly on the last school day of the year.   This latter function was held in the school hall on Thursday, 20th. December, members of the school council, parents and others interested being in attendance.

In his report the president of the school, Mr. J. Wallace Ross, reviewed the year’s work and stated that this had been successful in every way.   Opened in 1922, each year since then has marked a steady, but sure development, and further extensions, to provide much needed accommodation, are an urgent need at the present time.

Proceeding, Mr. Ross pointed out that the development of the higher grades of technical work was necessarily a matter of gradual evolution rather than of rapid development, and reviewing the year just ended, he, the council and staff, were assured that good progress had been made.
​
​The Work of the School
​The work of the school is grouped into three main parts – the junior day school for girls, the junior day school for boys, and the senior school – the latter being taken largely in the evenings, although each year sees an extension of the classes taken in the day time.   The entrance standard to the girls’ school is that of a merit certificate – accommodation being limited, it is necessary each year to hold a classifying or entrance examination.

We congratulate Miss W. Nash on her promotion to the principalship of the Box Hill Technical School, and at the same time welcome Miss F. Swan, the new mistress in charge, whose valuable experience in technical school affairs has eminently qualified her for this position.   In addition to the work of the junior day school, special classes for seniors in dress making, millinery, cookery, applied art &c., will be conducted next year.

In the boys’ day school, the entrance standard is from the 6th. grade, but to do a satisfactory course it is essential that applicants for admission be well grounded in arithmetic and English.   Students weak in these subjects are advised to complete a further year in the elementary school before transferring to the technical school.   In fact students entering from the 8th. grade, often complete the most satisfactory courses.

The idea that a student weak in ordinary school subjects is therefore eligible to enter on a technical course of study is a stupid one.”

Features of the ceremony were a successful play by the dramatic club, and a break-up picnic held by the girls’ school.

The president, in reviewing the work of the year, reported a further period of steady progress.   The school had suffered a severe loss by the death of Cr. J. Richards, one of the foundation members of the school council.   Quiet and unobtrusive in his manner, but possessing a high technical knowledge of the building and allied trades, he was ever ready and willing to render service to the school, which always had the benefit of his wide experience.

​The naming of the school “Houses” by the vice-president, Mr. H. J. Thoms, at a recent assembly of the boys’ school is a fitting commemoration of the memories of the late Cr. J. Richards and three other gentlemen who have done so much for the school, the “Houses” concerned being named after the late presidents, T. Wilson and O. R. Snowball, and vice-presidents Grout and Richards.

The best thanks of all were due to Mr. C. R. Fraser, B.Sc., the Principal of the school, to Miss Swan (mistress in charge of the girls’ section), to Mr. R. G. Perry, B.Sc., acting in charge of the boys’ school), and to the splendid staff who had brought about such a year of progress.

The enrolment for the school again exceeded 1,000 and accommodation was taxed to the utmost.

Within a few weeks the Technical Schools will be saying an official farewell to Mr. Donald Clark, M.M.E., H.C.E., B.A., Chief Inspector of Technical Schools, who retires from the position he has occupied since its creation in 1910.   He had been for many years connected with the Bairnsdale and Bendigo Schools of Mines as principal, and later with the Melbourne University as lecturer in metallurgy and mining engineering.”

​
“BRIGHTON TECHNICAL SCHOOL  1933
More Accommodation Needed
​Reference to the value of training given at technical schools was made at the annual exhibition of work of the Brighton Technical School last night.   The president of the school council (Mr. H. A. Abbott), said that the objective of the council was to make the school the centre of educational activities in Brighton.   There was great need for extensions to provide more accommodation, particularly in the Cora Lynn girls’ section of the school.

The principal (Mr. Percy Everett), in his report stated –

Much praise has been accorded the efforts of Miss F. A. Swan, mistress in charge of the Cora Lynn girls’ branch of the school, for the splendid tone maintained and sound instruction.   The inspectorial board has commended the staff for the high standard of training afforded.   The number of girls at Cora Lynn, which considerably exceeds that of former years, is still limited through lack of accommodation.   At the entrance examination for about 50 vacancies, nearly 200 girls applied on Saturday last, but only 25 per cent of these applicants can be accommodated.

​The school council is making urgent representations to the Minister for extensions to Cora Lynn.

Notwithstanding the dearth of suitable positions for girls, no difficulty was experienced in placing a very large proportion of the girls who had completed the full course of training in the junior technical school at Cora Lynn.

The courses in invalid cookery were also well attended.   The standard was appreciated by the Nurses’ Board during the year.   Recognition is now given those who qualify at Brighton.”

Reference :  “The Argus” Wednesday, 13 December, 1933, page 11.
​
​
“THE SCHOOLS   1936
Cora Lynn
At a recent Theory of Dressmaking examination I was convinced that we had at least one philosopher in our midst.   This third reason was given in reply to “State three things that may cause the machine to go wrong”.

“It may be the cause of the one who is using the machine”.

Taking ourselves seriously, as machines made and equipped for service, we are seldom convinced that the deficiency rests with the individual.   If ever convinced, we place this reason a very good last.

The will to succeed carries one on to success.

It is only reasonable to expect that every girl and boy who attends this secondary school should realize the working principle that this will to work, and to apply one’s energy throughout one’s school years, helps the machine to function beyond these walls.

Unlike other machines, we, as individuals, can choose our place, and adjust ourselves to conditions and environment.

Therefore, when removed from the vigilance and direction of our teachers, scholars, who have acquired the habit of application are welcomed in the workshop, office, factory, or home, and step by step, move toward their ideal in office.

How much easier the work of education would be if the individual did not slack, and did not wait for the impetus from some interested, far-seeing adult.

To be a successful leader, one must possess the gift of a personality, which awakens that power within.

Are you still a prisoner bound by the shackles of self, or are you acquiring the habit of “Self reverence, self knowledge, self control?   These three alone lead on to sovereign power.
F. A. SWAN.” 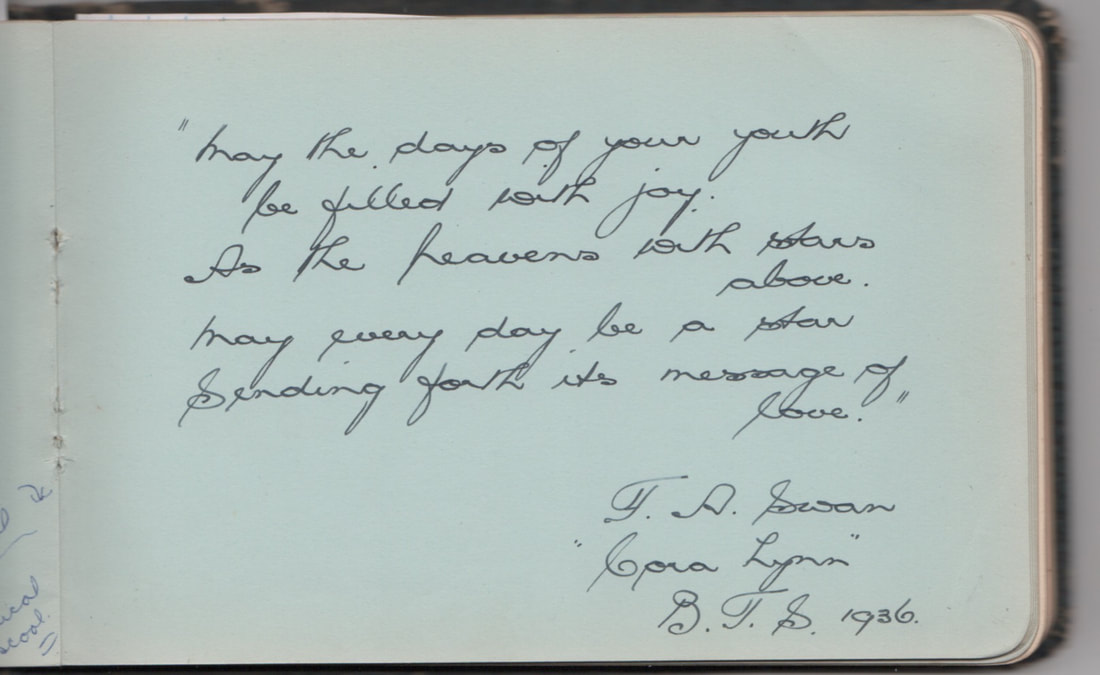 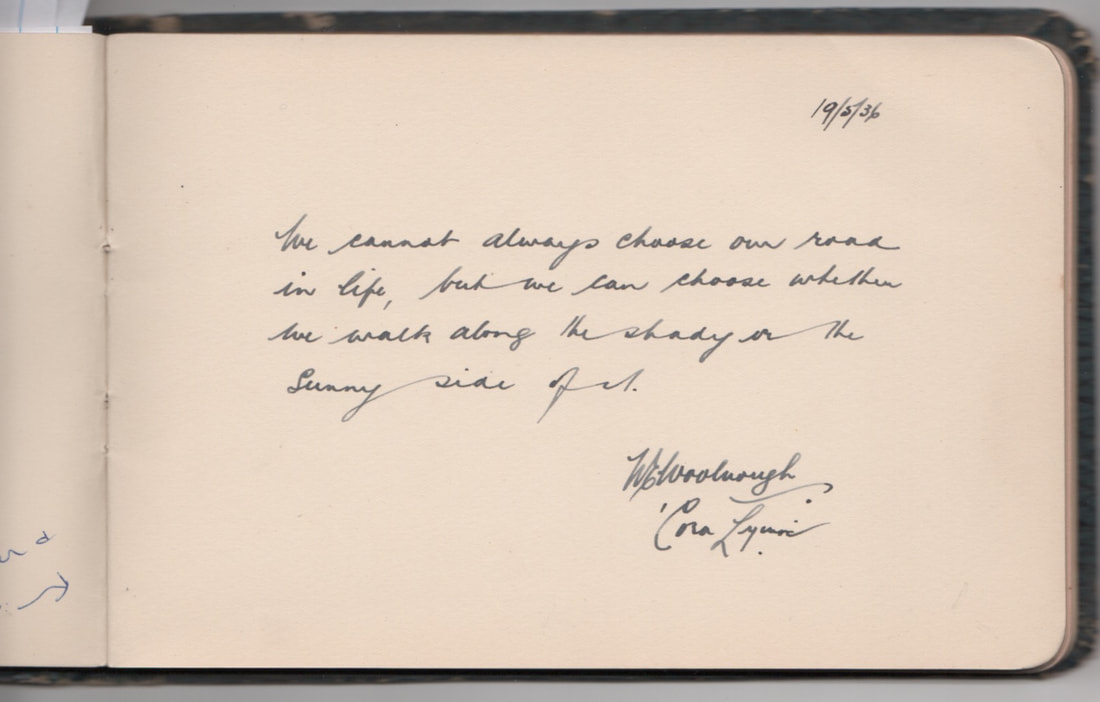 ​The signature “W. Woolnough” “Cora Lynn”, is that of Miss Woolnough D.T.S.C.,  -  an Art teacher who taught at Brighton Girls’ Technical School for many years.   Miss Woolnough’s classroom housed two very large weaving looms and many small weaving looms, as well as art material, drawing boards and drawing T squares.   Only the senior students and adults were permitted to use the large weaving looms, much to my sorrow.   I remember Miss Woolnough and her Art room very well, as it is where I made a hand woven burgundy and white scarf for my brother, Jim.
​
Autograph courtesy of Bob Tidball. 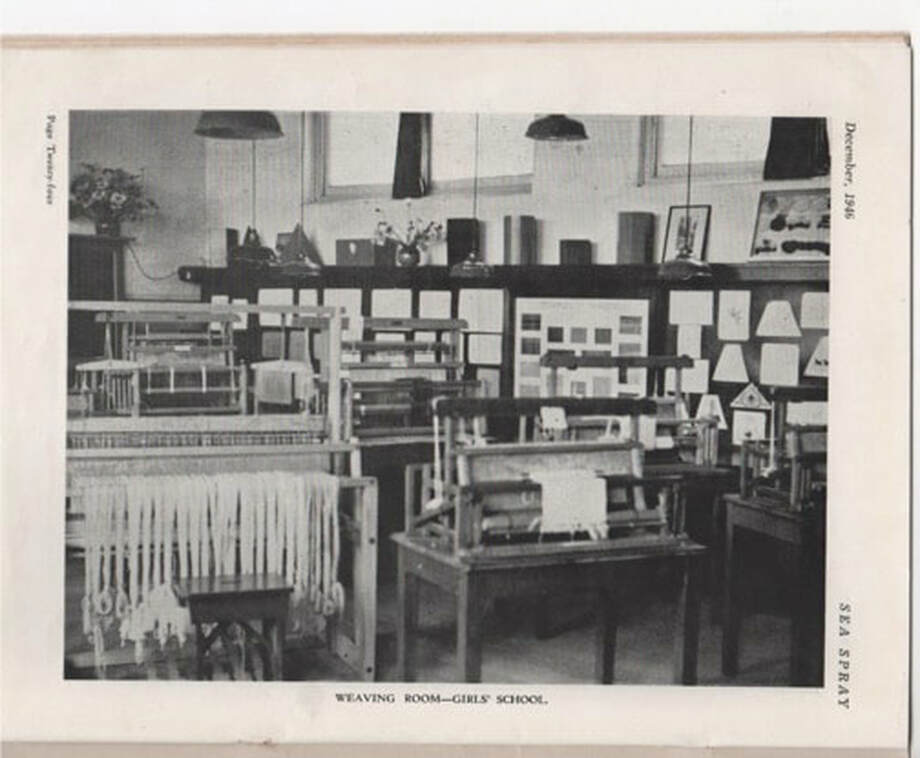 Miss Woolnough’s Art and Weaving Classroom.
“Sea Spray” Magazine 1946.
​
​
STAFF NOTES – 1947
MISS SWAN’S PROMOTION
​Miss F. A. Swan, Headmistress of the Girl’s School, left us at the beginning of this year to take up the position of Principal at the Box Hill Girls’ Technical School.

All students past and present congratulate her on her promotion, and wish her success in her new sphere.

Miss Swan came to this School in 1929, and a more popular Headmistress it would be hard to find.   Her kindly manner and wise teachings have influenced the characters of a great number of girls in this district, and all regret her departure from the School.

As a token of goodwill and appreciation, gifts from the Council, staff and students were presented to Miss Swan.

Miss B. M. Beaven, a former Headmistress of Sunshine Technical School, has filled the vacancy caused by Miss Swan’s departure. 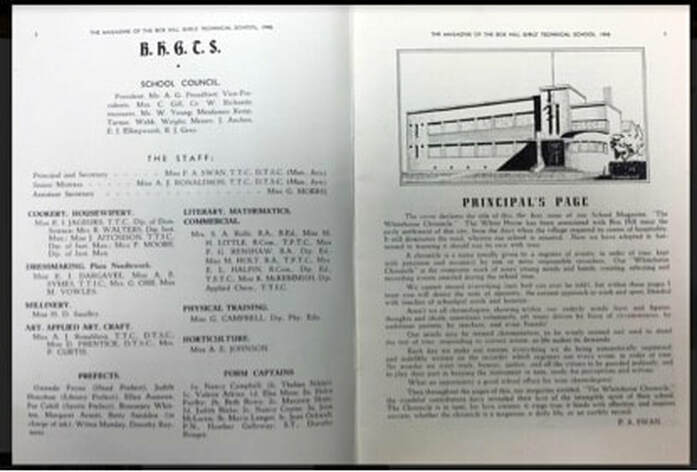 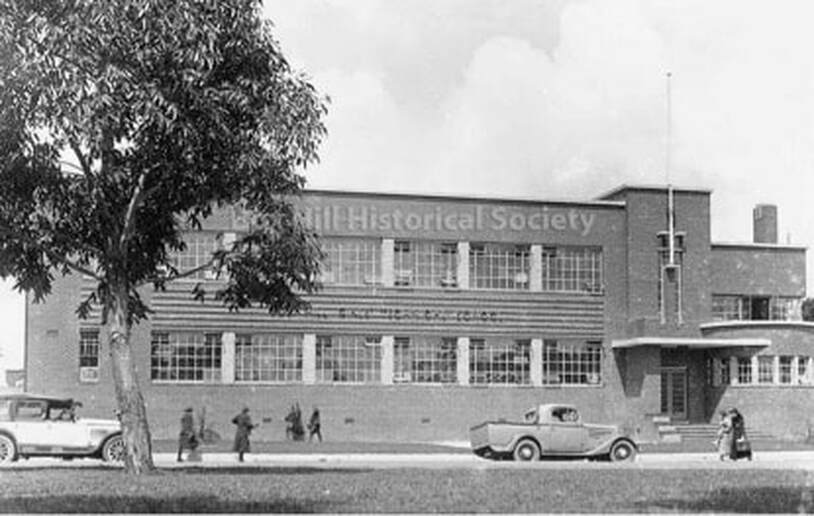 Box Hill Girls’ Technical School.
Courtesy of the Box Hill Historical Society.
​Florence Annie Swan whose usual place of residence was 22 Lawrence Street, Blackburn South, died at Surrey Hills on the 28 November, 1983.  She died, aged 90 years, from Renal ischemia – 1 month, Atherosclerosis – years and Hypertension – years.  Her occupation as recorded on her Death Certificate was “Retired Headmistress”.   Florence did not marry.    On the 30 November, 1983, her body was cremated at Springvale Crematorium.
​………………..
Footnote :
During my school years and in later years, I always had kindly feelings towards Miss Swan as her smile and demeanour suggested to me that she was dedicated to her profession, and enjoyed the company of her many hundreds of students.

In later life I researched my family history back to the 1700s.   Much to my surprise, I found that my family tree showed “Swan family” ancestors.      Which raises the question – did I feel so kindly towards Miss F. A. Swan because of a deep connection emanating from our common ancestors?