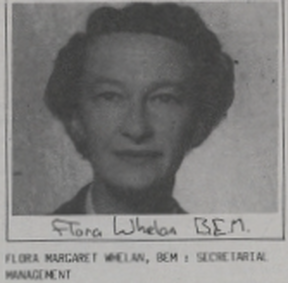 A copy of the photograph of Flora Margaret Whelan from the 1988 "Seaspray", page 64.
Flora Margaret Frances Whelan was born to Francis Gordon Whelan, and his wife Mabel Lucretia Whelan, née McGuire, at St. Kilda, Victoria, on the 10th. September, 1918.   Flora attended Brighton Technical School between the years 1931 – 1934.

She was a prolific contributor to the early “Sea Spray” Magazines and later, after she left the school, she contributed articles to “Sea Spray” on behalf of the Brighton Technical School Old Girls’ Association.   Flora was a member of the Committee of the Brighton Technical School Old Girls’ Association in 1937.
​
“LAND’S END.
Defiant stand the Cornish coastal cliffs,
With furrowed features and a shaggy brow;
While rocky sentinels churn to shreds of foam
The sullen sea, whose billows hammer hard
Upon the headland, carving gloomy caves,
Which echo all the fearsome moans and wails
Of some tormented spirit doomed to dwell
Forever in despair.   And far above,
Wind-sculptured turrets and fantastic forms
Are fretted in the granite crust, and rise
Enshrouded with a superstitious dread
And ancient Celtic legends picturesque.
Land’s End!   O watchtower of a fortress bold,
Your courage and fidelity I love.
Flora Whelan.
“Sea Spray” December, 1937, page 36.”
​
​“LAKE OF GENEVA.
The limpid crescent’s countenance is calm,
But sensitive and sympathetic too
And southern snowy alps enhance the charm
Of Switzerland’s largest lake of lilac hue.
Although a thousand miles from yonder shore,
I hear God’s handiwork condemning war.
And pleading peace with prayer and silent psalm.
Flora Whelan.
“Sea Spray” December, 1939, page 40.”
​
​In 1939, the Sands & McDougall’s Directory carried a reference to Francis G. Whelan (Flora’s father), whose residential address was listed as 310 Inkerman Street, St. Kilda.

An introduction from a B.T.S. past student helped Flora secure an office junior vacancy in the highly competitive employment market.   So began a varied and eventful office career.

Highlights include serving as a member of the Secretariat for the first British Commonwealth Conference, Canberra, 1947, also, the seven years as a Ministerial Typist on the staff of three Ministers, one being the Rt. Hon. R. G. Casey, (later Lord Casey).    In the 1950s. Flora left Melbourne and adopted Canberra as her home, loving it for the rest of her life.
​
Memorable office experiences overseas were working for a Harley Street, Accountant, and for Solicitors in one of the famous Inns of Court, London.   Even more breathtaking, was as acting as Secretary to the Governor from Australia to the International Atomic Energy Agency during three conferences held in the Hoffburg Palace, Venice.

After many years as Personal Assistant to the Permanent Head of the Department of the Army, came the culmination – the totally unexpected award of the British Empire Medal.  (BEM). 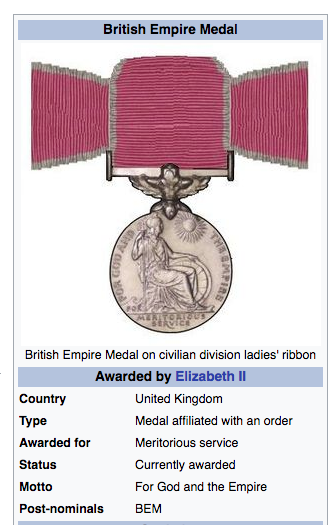 Flora continued to write social comment articles for newspapers until she was nearly 80 years of age.   Her thoughts on “Christmas” appeared in “The Canberra Times” on Monday, 16 December, 1974, page 2.
​
“SPIRIT OF CHRISTMAS.
SIR, - I wholeheartedly support Garth Cameron’s reasoned plea for less “parties” this Christmas.   (Letters, December 2).

When so many in the world are starving, how can we justify over-indulgence in high living and other luxuries?

Our welcome to “the Christmas guest” would be more sincere, and indeed we ourselves could be happier, healthier – and safer on the roads – if, by our unselfishness, some of the starving could be fed.   Besides, He whose coming we celebrate said :
“Inasmuch as you do it for the least ……you do it for Me”.
Flora Whelan.
Manuka.”
​
Florence Whelan published a “thank you” notice in “The Canberra Times” on the 17th. September, 1983, just one week after her 65th. birthday.

“WHELAN , Florence – Thanks all friends including those
formerly of Army Department, those at Defence,
Manuka Y and Wesley Uniting for their good wishes
​                 on her retirement.   Each day is a gift.”

“I FELT PART OF THE PILGRIMAGE.
CONGRATULATIONS to Marion Frith on her
“sacred journey” (CT, Saturday Magazine,
April 29, p C1).   This poignant 1995 experience
at Anzac Cove was related with sensitivity and
authenticity, while the letter written by Lieutenant
​                  Frank Killeen (the grandfather Marion Frith never
knew), and the photographs, graphically linked
past and present.   After reading “Sacred journey”,
I felt most appreciative and very much part of
the pilgrimage (and I quote) “made for us all”.
(Miss) FLORA WHELAN.
Weston.

Flora Margaret Whelan B.E.M., died at the Mirinjani Hostel, Weston, on the 9th. August, 2014.   The members of her family published a Tribute to Flora in “The Canberra Times” on the 16th. August, 2014.

Loving sister of Merle, Frank (dec.) Isobel, Gilbert (dec.)
and Ruth. Flora was devoted to Australia and through
her work, charities and Church, dedicated herself to
helping others.  Flora’s work included Hospitality
Management Department of Defence and senior
secretary, former Department of Army.

Flora left Melbourne in the 1950s. and adopted
Canberra as her home, loving it ever since.

A perusal of the 1930s. “Sea Spray” Magazines revealed contributions from not only Flora, but her sister, Isobel, as well.   The 1939 “Sea Spray” records the name of Flora’s brother, Gilbert.  So it can be assumed that at least three of the Whelan’s six  children attended Brighton Technical School.

Little is known of Flora Whelan’s private life, other than she did not marry.   It must be remembered that Flora turned 21 years of age in 1939, the year that World War II commenced.  Was she personally impacted by events that followed Australia’s Declaration of War in 1939?

We, past Brighton Technical School students, salute you Flora Whelan.