Gwendolin was born to Robert Arundel Leech and his wife Mary Ann (Marie) Leech, née Mahony, on the 3rd. July, 1921 at Lilydale, Victoria.   She married
Douglas William Arnold at Wesley College Chapel on the 8th. June, 1946, and died, aged 90 years, at Mirboo North on the 14th. March, 2012.

She took a position at G. J. Coles in Hampton, working in sales and then in the office, at stores in Melbourne, metropolitan and country centres.    She was with G. J. Coles for nine years.   Her sports were basketball and swimming, up to this time.

After marriage, she and Doug lived their early married life in Vincent Street, Sandringham in a house her father built for them.   Julie, Susan, John and Richard were born in Sandringham.

The family moved to Krowera in 1953 and tried their hand at dairy farming for a few years.   Jennie was born at Krowera and John Douglas died there, aged 3 years.

On returning to the Sandringham area, Gwen and Doug bought a milk bar in Black Rock, staying three years, but the lure of country life then took them back to Gippsland.

They settled this time in Mirboo North, dairy farming at first.   Gwen still on the farm, which Richard runs in conjunction with his own farm adjacent.   Gwen has led an active community life in Mirboo North, on committees of State School, C.W.A., Girl Guides for 11 years and Red Cross.

After the children left home, Gwen and Doug spent time travelling around the world and both played lawn bowls.”

Gwendolin’s husband Douglas William Arnold, was born at Caulfield on the 28 July, 1921.   Douglas died at Mirboo North on 4th. November, 1995.
Gwendolin and Douglas had five children. 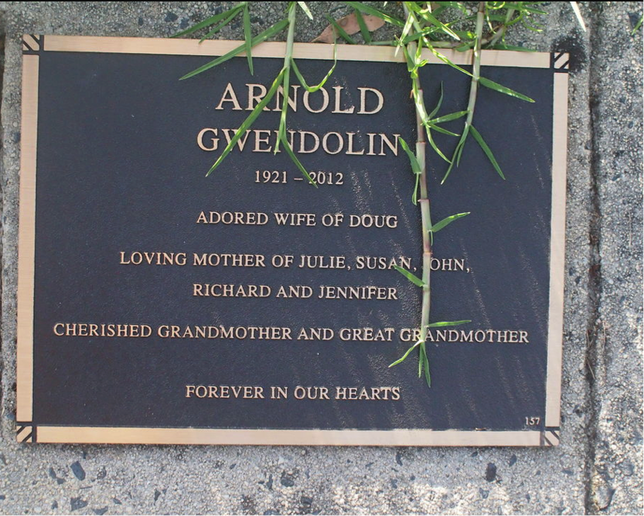