Brighton technical school, Victoria, Australia.
Percy Edgar Everett
​Principal of Brighton Technical School 1932 – 1934
​​Percy Edgar Everett, (born Joseph Everett), architect and headmaster, was born on 26 June, 1888 at Geelong, Victoria, seventh child of Joseph Everett, a blacksmith from England, and his Australian-born wife Emma Mary, née Elliott.   Educated locally at Ashby Public School, Percy was articled to W. H. Cleverdon, a Geelong architect, and studied at the Gordon Technical College.   He was employed as architectural draftsman (1907 – 10) to the Geelong Harbour Trust before he joined the firm of Seeley & King and later became a partner, during this time he designed the Sailors’ Rest building.  In 1909 a Summons was issued for Percy Everett in the Petty Sessions Court, Geelong, because - “between sunset on 21/10/1909 and sunrise on 22/10/1909 at Geelong he did ride a bicycle without a properly lighted lamp.   Fine 10/-,  paid.”

It was reported in the “Geelong Advertiser” on 30 August, 1911, page 3, that    “Mr. Percy Everett, the Gordon Technical College instructor in building, construction, sanitation, etc. delivered an illustrated lecture on “The Model House for Australians”,  to the Geelong Branch of the Australian Natives’ Association.   He by no means confined himself to remarks on the home, but had something also to say on the general subject of sanitation.   In this connection he spoke particularly of sewerage, and the various methods of disposal.   He did not think Geelong should go in for a sewerage farm, as it might be a menace.   So far as the ocean outfall was concerned, they should have full experiments of the currents, as they did not want their bathing and holiday resorts spoilt.   At Sydney there was the back current, and people bathing, at Manly or Bondi were not concerned at the fact that the city’s sewage was being discharged into the ocean a comparatively short distance away.   Mr. Everett also spoke of buildings, public and private, and Mr. H. L. S. Potter, the lanternist, showed many views of old and modern houses and styles of fittings, which were well explained by Mr. Everett.”

In 1913 Percy Everett visited Britain and Europe.   When he returned to Geelong his firm was taken over by Laird & Buchan.  While retaining ties with Laird & Buchan, Percy moved to Melbourne in 1914, where the wartime shortage of architectural work led him in 1916 to take up the headmastership of Brunswick Technical School.   Although he maintained a private practice in these years and was responsible for the development of the Victorian Education Department’s architectural curriculum, his practical work was sparse. 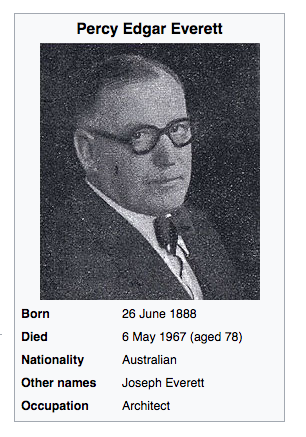 Percy Edgar Everett - Another Statesman
​“The Age” newspaper on Wednesday, 14 March, 1917, page 11, published the following :
Principal of Technical School Enlists
​Mr. Percy Everett, principal of Brunswick Technical School for
nearly two years, has enlisted.   At the meeting of the Brunswick
Council on Monday night a resolution was carried expressing
appreciation at the patriotic action of Mr. Everett, and also the warm thanks of the council for the valuable services rendered by him as the master of the school. 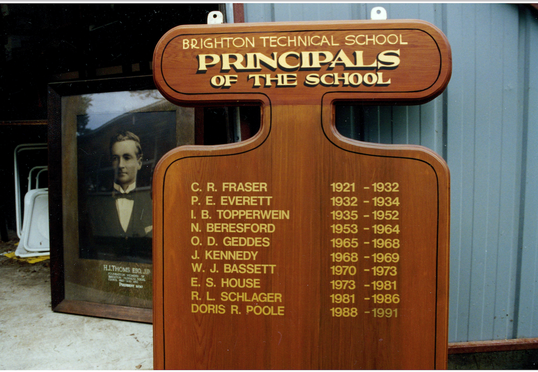 COURTESY OF MYER BLOOM. Brighton Technical School. Berwick Street, Brighton, Victoria. Honour Board, Principals of the School. 1921 - 1991. Photograph taken 7 May, 1995, during demolition of the School.
​
​“The Age” Tuesday 3 July, 1934, page 9 recorded :
Government Architect
Mr. P. E. Everett Appointed.
​
​“It was announced after yesterday’s meeting of Cabinet that Mr. P. E. Everett had been appointed as Government architect.  The position has been vacant since Mr. E. Smith retired from it about five years ago.   The architectural work in connection with the New Titles Office and the remodeling of Government buildings has been carried out by outside architects.

Mr. Everett, who is 46 years of age, received his early training at the Gordon Institute of Technology, Geelong.   He has practiced as an architect, and his work is referred to favorably in professional circles.   Mr. Everett was principal of the Brunswick technical school, and now holds a similar position in the Brighton technical school.

Mr. Everett is a member of a well-known Geelong family, and was at one time partner with Mr. George King in the architectural firm of Messrs. Seeley, King and Everett.”

Autocratic in temperament and energetic in application, Percy Everett made his distinctive imprint on public buildings throughout Victoria.   He had completed a world tour in 1930, and in 1945, travelled to North America to study recent trends in public architecture.   Although his eclecticism embraced Art Deco, American Beaux-Arts and Modernism, his additions to existing buildings were unsympathetic to the work of earlier architects.   In their siting and insistently three-dimensional character, his buildings were statements of civic importance.

“Construction” Sydney, NSW reported on Wednesday, 2 April, 1941, that “Percy Edgar Everett, William Rupert Dean and Frederick Charles Purnell have been appointed Members of the Architects Registration Board of Victoria for a period of two years from the 9th. April, 1941.”

Percy Edgar Everett is best known for the striking Modernist / Art Deco schools, hospitals, court houses, office buildings and technical colleges the Victorian Public Works Department produced over a period of 20 years, commencing in 1934.   His most well known design is the Police Headquarters at Russell Street (1940-1943), giving Melbourne “its first Gotham City silhouette”.   Percy Edgar Everett’s signature style reflected and often combined a range of sources including American Art Deco, Streamline Moderne, and European early Modernism, such as Brick Expressionism, the German Bauhaus and even Russian Constructivism, drawn from magazines and his two trips abroad.   He was also adept at designing in historicist, domestic and rustic styles when appropriate.

Perch Edgar Everett retired as Chief Architect from the Victorian Public Works Department in 1953, but continued in private practice until the late 1950s.   Following the death of his wife, Georgina Buchanan Everett in 1956, he married a widow, Mavis Delgany Stewart, neé Richards, on 26 June, 1956, at Brighton.  Percy Everett died at Brighton Beach, Victoria, on the 6th. May, 1967.

Register of Convictions, Orders, and other Proceedings in the Court of Petty Sessions at Geelong, the 1st. day of November, 1909.