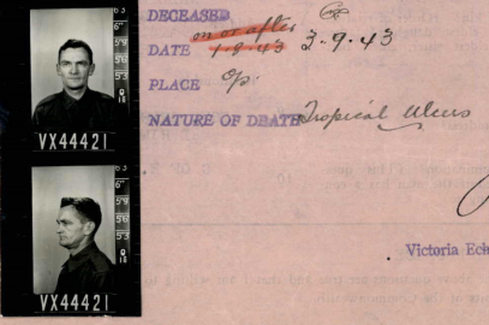 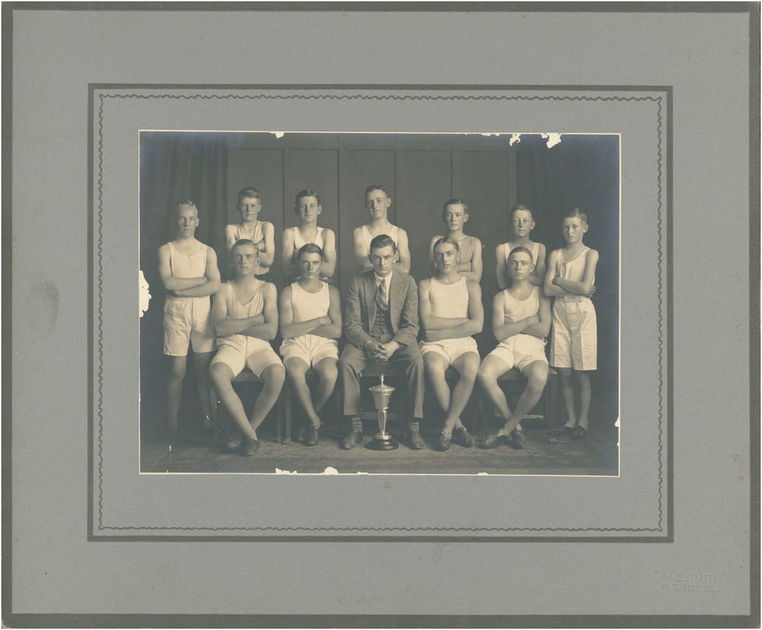 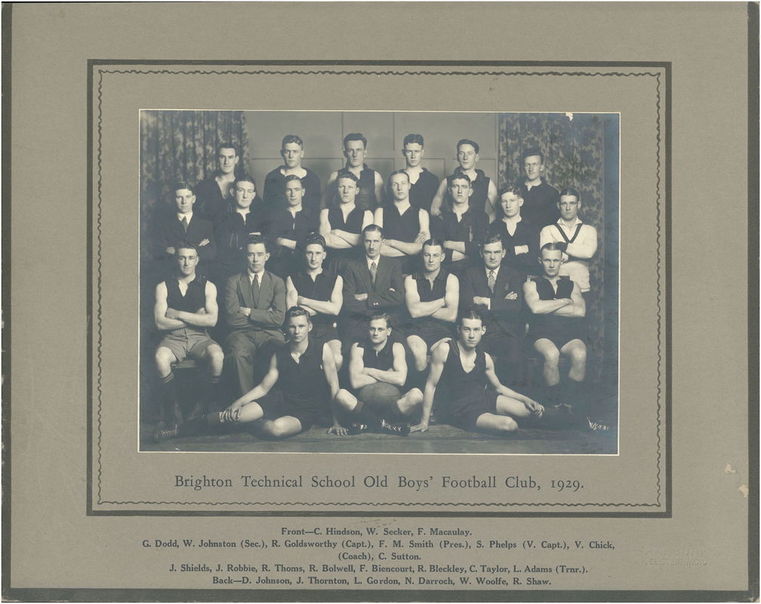 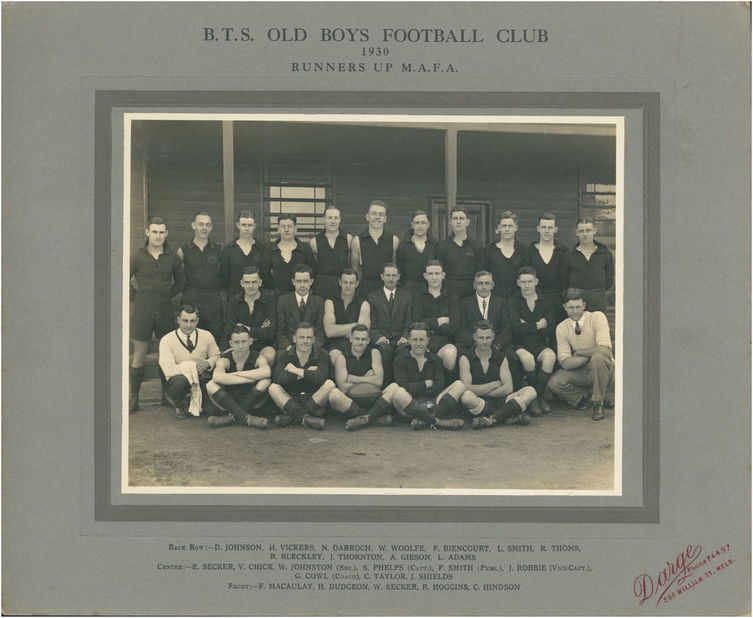 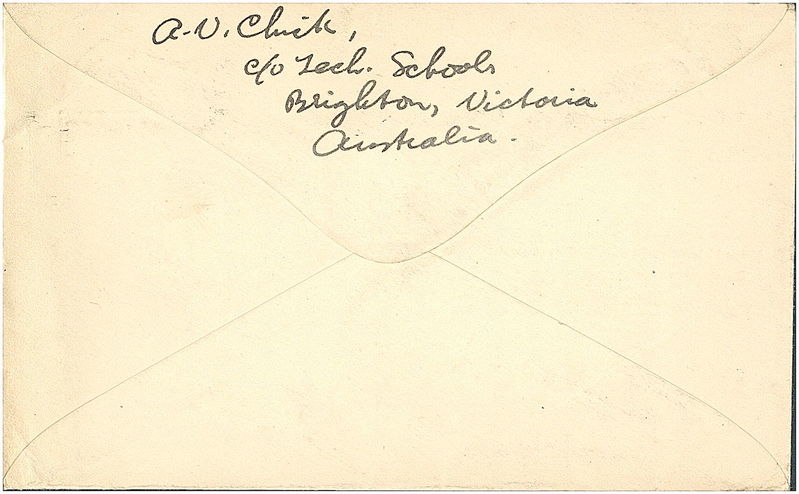 ENVELOPE FROM THE PAST
Letter sent to New York, (14 March 1931), by Anzlie Vivian CHICK, a former member of the drawing and plumbing staff at Brighton Technical School. Anzlie died a prisoner of the Japanese in Thailand in World War II.
​
​ANZLIE VIVIAN CHICK
HIS DEATH AT APALON, THAILAND.
The World War II Service Record of Anzlie Vivian Chick, formerly a member of the Drawing and Plumbing Staff at the Brighton Technical School, Victoria, records few details of his life after he was reported ‘missing’ and believed to be a prisoner of war, in April, 1942.

The key words in his Service Record that give a clue to his whereabouts at the time of his death in late August or early September, 1943 are  :   “Apalon POW Cemetery”.

A search of the Internet, using the words “Apalon Thailand” revealed a most informative book which provided details of the events that took place at Apalon, Thailand during World War II.   The book title is    –   “The Thailand Burma Railway 1942 – 1946   -  Documents and Selected Writings”.   Edited by Paul H. Kratoska.   Volume 1  Summary Accounts, published by Routledge Taylor & Francis Group, London and New York.    (Only extracts from this book have been uploaded to the Internet.)

Page 65.   Other cemeteries located this day were 55 Kilo (KHON KHAN) – 262 graves, mainly Dutch and Australian;  60 Kilo – 46 graves;  70 Kilo (MEZALI or KAMI MEZALI) in beautiful condition;  MEILOE – 15 Australian graves;  and APARON or APALON with one large and one small cemetery.   It was at APARON that a Japanese officer said, “Let the men die, it doesn’t matter”.

Page 99.   Travelling along this line we passed many places that bring back sad memories of terrible times of suffering, terror and misery, when we lost hundreds of comrades in arms who perished from hunger and deprivation, broken under the yoke of Japanese slavery.

These are places with unpronounceable names, which figure on no map and now consist of no more than emplacements and a few sheds made from bamboo and atap.   Places like Tamarkan, Aruhiru, Wampe, Tha Sao, Tampie, Khai Sai Yokoe, Tintin, Hindate, Pramkasi, Djiyale, Keungluay and in Burma Tanbyuyzayat, Massale, APALON, Anar Kwan Redpu, Wagale and many others – names that evoke many memories of long months of struggle and suffering, in which all only knew one desire : peace and freedom.

Page 277.              PRISONERS BECOME RAILWAY LABOURERS.
Movement of prisoners-of-war to become labourers on the railway began on 14 May, 1942, when A Force, 3,000 Australians under Brigadier A. L. Varley, AIF, embarked from Singapore harbor for Moulmein, and were joined off Malacca Straits by the British Sumatra POW Battalion under Capt. Dudley, P. Apthorp, R. Norfolks who were an escape party from Singapore who got no further than Sumatra. ………………………..

On 21 October they re-embarked at Mergui, disembarked at Moulmein and were entrained in cattle trucks to Thanbyuzayat to work as labourers on the Burma end of the Thai-Burma Railway.   The Japanese 5 Railway Regiment had already cut the central trace of the line and had begun building work camps, which eventually they sited at Wegali, Thetkaw, Hlepark, Kum Knit Kway, Retpu, Anankwin, Khonkhau, Tarngzun, APALON and Chaugena (just off the Thai side of the frontier).

Page 282.   On the Burma side the engineers gave priority to work on the three bridges over the Zami, Mezali and APALON rivers, steel bridges with by-pass wooden bridges and extended the section of track as far as the Three Pagodas Pass.

Page 284.   By October the Thai and the Burma sides were nearing completion.   There were 688 bridges but only seven of them were of steel with concrete piers, one of these being that over the Maekhlaung at Tha Makham, the other six in Burma, over the Zami, APALON, Mezali, Winyaur, Khonkhau and Myettaur rivers.  Few of the others were over 100 metres, but they included the double plank viaduct of Arrow Hill. ………………………..
​
OPENING CEREMONY ON 25 OCTOBER.
On 17 October, 1943, the Burma and the Thai sides linked up at Konkvita, 262.87 km., in deep forest, about 40 km southwest of the Thai-Burma frontier.   Locomotive No. C5631, decked with two ‘poached egg’ flags, moved up on the Thai side.   Major-General Ishida Hideguma presided at the ‘opening-to-traffic’ ceremony held on 25 October at which Lt.-Col Sasaki, CO of 5 Railway Regiment, and Lt-Col Inai, CO of 9 Railway Regiment, drove specially made gun-metal dog-spikes into an ebony sleeper.

Page 285.   137.   Though no difficulties were experienced the situation between APALON (km 332) and Moulmein was less well in hand than between Nonpladuk and APALON.   The 9th. Railway Regiment did its work but was seriously handicapped by the fact that nobody could stop the Burmese coolies who were in their own land from deserting.

Let us not forget the sacrifices made by Australia’s service men and women who served in World War II and, in particular, the sacrifice made by Anzlie Vivian Chick, formerly a drawing and plumbing teacher from Brighton Technical School, Berwick Street, Brighton, Victoria.